SEA OF THE DEAD 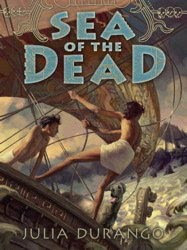 SEA OF THE DEAD, by Julia Durango (Simon & Schuster 2009)(ages 8-12). Thirteen-year-old Kehl is the youngest son of the premier warrior prince of the Teshic Empire, an empire at war with the rebel Fallen. Training to become a warrior himself, and trying to live up to his family's expectations, Kehl is kidnapped from barracks by the minions of the Fallen King.

Taken aboard their ship, Kehl learns their ways and some uncomfortable truths about the Empire and how his mother was killed...

In SEA OF THE DEAD, Durango offers a likeable and engaging protagonist, as well as rousing adventure; and creates a unique fantasy world with satisfying amounts of both intrigue and blood and mayhem.
Posted by Greg Leitich Smith at 9:59 AM