THE WITCH'S GUIDE TO COOKING WITH CHILDREN 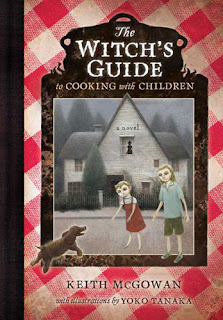 THE WITCH'S GUIDE TO COOKING WITH CHILDREN, by Keith McGowan, ill. by Yoko Tanaka (Henry Holt 2009)(ages 8-12). Eleven-year-old Sol Blink and his younger sister Connie have moved with their father and new stepmother to Grand Creek. Their new neighbor, Fay Holaderry, is a little creepy and may be older than anyone thinks. And then Sol notices that the bone Fay's dog is gnawing on is a human femur...

WITCH'S GUIDE is a fun new take on "Hansel and Gretel," with 21st Century protagonists and all the Old World charm, err, creepiness, of Bavaria's Black Forest. Both sinister and enjoyable, WITCH'S GUIDE will have readers laughing, thinking, and looking for recipes.
Posted by Greg Leitich Smith at 1:34 AM