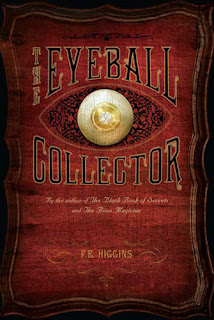 THE EYEBALL COLLECTOR, by F.E. Higgins (Feiwel & Friends 2009)(10-14). In the corrupt city of Urbs Umida, divided between the rich north and the southern slums by the toxic River Foedus, Hector Fitzbaudly is living the life of a scion of society and wealth.

But when his father dies after being blackmailed by the dastardly Gulliver Truepin, Hector loses everything and must make his way on the south side. And all he has left is revenge on the one-eyed man who killed his father...

A companion to THE BLACK BOOK OF SECRETS and THE BONE MAGICIAN, THE EYEBALL COLLECTOR is another winner set in the deliciously creepy world of Urbs Umida. Read them all.
Posted by Greg Leitich Smith at 1:02 PM