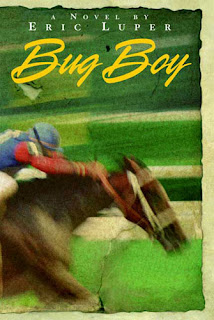 BUG BOY, by Eric Luper (FSG 2009)(12+). It's the height of the Great Depression and 15 year old Jack Walsh is senior exercise boy for his stable at Saratoga racetrack, but aspires to be a world-famous and winning jockey. It's all he can do at the moment, though, to keep his mind on his job, eke out a meager existence, and send modest sums back home.

But Jack gets his chance when his stable's premier jockey suffers an accident at the gate. Jack immediately becomes an unexpected success and celebrity. But between the mobsters who want to fix the races and the fat cats who own them, can Jack make it to the finish line in one piece?

Replete with period detail, BUG BOY exposes in compelling fashion both the glamor and dubious ethics of the 1930s horse-racing culture. Jack is likeable, engaging, and sympathetic. In short, BUG BOY is the fascinating story of a young man deciding who he is and wants to be in a world of temptation, corruption, and (sometimes) integrity.
Posted by Greg Leitich Smith at 5:15 AM